Last night I watched the movie “Leap!.” It was a cute, animated film following two orphans searching for their dreams in Paris in the late 1800s. The characters individually were adorable.

But the whole time I watched the movie, their relationship between each other rubbed me the wrong way. I made comments while we watched, but it kept bothering me. I kept thinking about it.

This morning I just happened to have a meeting with Christine, our Safety Team president, and I discussed how it was little, but it bothered me. It bothered me that this was the relationship playing out in a kids movie. She reminded me that erosion occurs one drop at a time. Drip, drip, drip. The little things add up.

So let me set the stage: Felicie and Victor have grown up in the orphanage together and have plotted their failed escapes many times. They finally find freedom in Paris and are quickly separated through a matter of accident, which leads them to the start of their dreams. Felicie moves in with a former ballerina/ now servant. Victor moves in with an inventor working on the Statue of Liberty.

Up to this point, they have acted as friends and siblings. Victor has cared for her in the manner of a big brother, but they are no more than that.

Victor invited Felicie out to have some fun. They end up at a pub where she dances. While she dances Victor yells, “That’s my girlfriend!” A nearby patron asks “Does she know that?”

Ok… Victor has made an assumption that is not based on evidence we’ve seen, but at least he’s called out on it?

Victor walks Felicie home and leans in for a kiss. His lips are pursed, his eyes are closed. There is no question what he wants. Felicie backs up and asks “What are you doing?” Victor plays it off and leaves.

There is a popular boy (Rudolph) at the dance academy where Felicie studies. He asks her on a date, which she agrees to. Later she is in conversation with Victor and talks about needing to be ready for an audition. The dance instructor has made it clear, she either gets this part or she is out of the academy. This audition is A. BIG. DEAL. Victor complains about how focused she is on dance. He asks her out, conveniently to the same time and place as her date with Rudolph. She doesn’t answer his nagging and grumbles off into her house.

He asks to the closed door “Is that a yes? I’m going to take that as a yes.”

Felicie goes on her consensual date with Rudolph. You know, the one she actually said yes to. Going on the date in the first place is fairly poor timing since she should be training, but it’s a mistake she has agreed to make.

It is her choice.

Rudolph is ridiculous and vain, and it is a failure of a first date, but that’s what first dates are for. To getting to know the other person. While on her consensual date they run into Victor, who despite not getting a “yes” from Felicie, has proceeded with setting up a romantic date.

Felicie introduces Victor to Rudolph as her friend. Victor yells at Felicie because he feels as though Felicie is embarrassed by him, though she has just introduced him as her friend. The two boys throw insults and then eventually flail at each other. Felicie tells them both they’re idiots and leaves the date.

After plot ensues in which Felicie has lost everything. Felicie ends up going to the inventor’s house and apologizing to Victor.

As I’m watching this I think: this is the part where we reunite the characters but why is she apologizing? Yes, Victor got his feelings hurt, but how is that Felicie’s fault?

She never gave any indication that she returned his romantic interest, (creating a verbal and physical boundary when he attempts to kiss her) and had never agreed to go on the date with Victor. She was on her date with Rudolph when Victor was unhappy with what he was getting from Felicie. Unrequited love sucks. But that’s not Felicie’s fault. Felicie repeats that Victor is her best friend.

Eventually we clash with our big bad and Victor comes to the rescue with a finally successful invention. Felicie ends up on stage just as she had dreamed and in the audience Victors says, “That’s my girl.”

Alright why am I bothered by all of this?

Victor is an endearing character. I’m not calling him a monster. He’s sweet, and silly and mostly supportive. He’s not evil. He’s not the villain. And that makes his pursuit of Felicie presented as romantic. He’s been a good friend. So why should kids think anything of his behavior? The pursuit of the romantic relationship is problematic, because Victor ignores what Felicie is telling him and acts as if she belongs to him.

This is a kid’s movie, and there is no seduction. But this is very similar to the patterns of “seduction” found in adult movies. And doesn’t it seem so normal for James Bond to force a kiss or Han Solo to grab onto Leia despite objections. Hell, John Wayne spanked his love interest. We didn’t listen to the heroines objections when we were kids, why would we care later?

Perhaps it’s no surprise this movie was put out by The Weinstein Company. 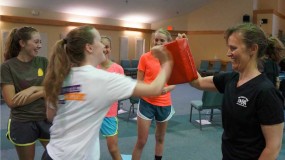 The Safety Team is dedicated to offering programs that are cutting edge, research-based, effective, and responsive to the voices and needs of women. With the support from workshop fees, donations and grants, we have developed an … END_OF_DOCUMENT_TOKEN_TO_BE_REPLACED

Sign-up for an internship or volunteer.  Are you a … END_OF_DOCUMENT_TOKEN_TO_BE_REPLACED

... for registering for the best self defense workshop for women! Click the button to Make a Donation with … END_OF_DOCUMENT_TOKEN_TO_BE_REPLACED

“It’s reassuring as a mother to see my daughter learn about defending herself and to practice with other women who understand about feeling not safe in some situations.”
END_OF_DOCUMENT_TOKEN_TO_BE_REPLACED

Sign-up for an internship or volunteer.  Are you a college or high school student? Speak to your school about an … END_OF_DOCUMENT_TOKEN_TO_BE_REPLACED

The Safety Team recommends a variety of apps, organizations, and information, some of which can be found here. Click below to view apps, helpful links, and … END_OF_DOCUMENT_TOKEN_TO_BE_REPLACED